On september 28th, 1903, the Urban Mountaineering Expedition, headed by Frank Ormiston-Smith, left Zermatt to attempt the conquest of the Matterhorn. On the 29th, the conquest was completed by the filming of the panorama from the actual summit of the mountain. The film consists of 20 scenes and illustrates the whole ascent from Zermatt through the Hornli Ridge. A copy of the film was found in Zermatt in 1953 and was was erroneously attributed to Frederick Burlingham and dated 1901. Since then, the film has been widely publicized as the first mountain film under the title of 'Cervin 1901', but this is incorrect. Ormiston previously had made 'Alpine series' (1901), 'The ascent of Mont Blanc' (1902), 'Climbing the Great Schreckhorn' (1902) and 'Ascent of the Jungfrau' (1903). The pictures and descriptions of the Charles Urban Trading 1903 film catalogue show without any doubt that 'Ascent of the Matterhorn' and 'Cervin 1901' are the same film. 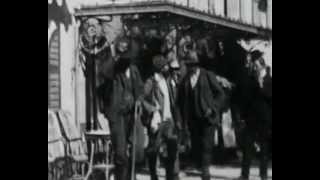 Ascent of the Matterhorn