This original, light-hearted film follows a skilled team of five climbers on an expedition to climb the North-West face of the remote Mount Asgard on Baffin Island... 45 days, 0 nights, 600km on foot, 11 days on the wall, 4 men, 1 woman - this film follows Sean, Nicolas, Olivier, Steph and Silvia on a rock climbing expedition on Baffin Island in the Canadian Arctic. Mentored by Freyr, the Viking god of weather and fertility, these 'warriors' ventured on a quest to enter the fortress of the gods (Asgard) without the magical rainbow bridge. Confronted with rock hard climbing on divine vertical granite; this is serious buiness...! 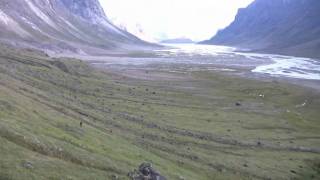