A record of the ascent of the Jungfrau by Frederick Burlingham accompanied by four mountain guides. The film starts with panoramics of the Eiger North Face from Kleine Scheidegg. The party begin the climb from the Jungfraujoch Station crossing the Jungfrau Firn and reaching the summit of the Jungfrau by the steep Roththal Sattel. Frederick Burlingham was a traveller cinematographer and one of the mountain film pioneers. Continuing the mountain film tradition established by Ormiston-Smith, Burlingham filmed several mountaineering films largely in Switzerland, taking mountain film in a new direction of immediacy and perceived peril. In the early history of factual filmmaking, Burlingham played a substantial role in developing the related genres of the mountaineering and the exploration film. 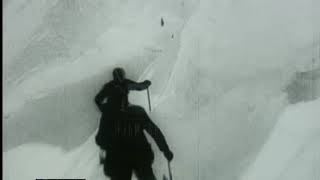