Record of the first ascent of Everest made without the use of oxygen equipment, made in May 1978 by Reinhold Messner and Peter Habeler. Could it be done? Would their blood vessels burst? Would they suffer brain damage leading to madness? Nobody was sure. Messner: 'I would never come here for trying Everest with oxygen. That is not a challenge for me.' A fascinating piece of history, well filmed by Leo Dickinson and Eric Jones (above the South Col Messner used a cine camera to continue the filming), featuring Messner and Habeler's thoughts. The film follows the usual sequence from Namche to Base Camp, through the Icefall, to Camps I, II and III. It also shows historical footage of the pioneering Mallory and Shipton expeditions. 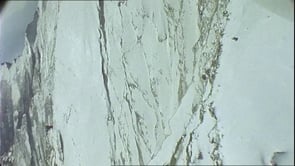