First episode of BBC's Earth's Natural Wonders: Living on the Edge. The first of two programs in which cameras explore some of the most inhospitable places on the planet and the people who live there, including a team of Sherpa roping a route up to Mount Everest, farmers fighting pitched battles to save their crops from marauding elephants on the slopes of Kilimanjaro, or conservationists trying to ensure a condor chick’s survival on Grand Canyon. In the Everest section, the film crew follows a team of Icefall Doctors, the Sherpas who are responsible for securing and making possible the route to Everest through the notorious Khumbu Icefall, while installing ropes and stairs to cross the huge crevasses of the glacier. 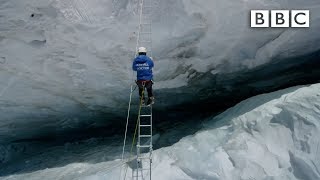