This Real People reportage filmed by Bob Carmichael, portrays a young Hugh Herr, only eighteen months after being rescued on Mount Washington, where after being caught in a blizzard and having passed three nights under extreme cold, suffered severe frostbite and lost his legs below the knees. With the help of leg prostheses, Herr is now back on the rock and climbs an easy route on Chickies Rock with the show host, Sarah Purcell, and a more difficult route on Shawangunk Ridge. Real People was a television series in which different hosts in front of a large studio audience were presenting reportages of varied 'real people' (as opposed to celebrities) with unique occupations or hobbies. 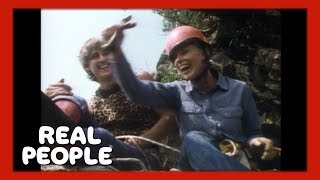