In this Real People reportage filmed by Bob Carmichael, we follow Ron Kauk as he free climbs the Rostrum, in Yosemite National Park, belayed by Rick Ridgeway. The segment also portrays Kauk, and shows him training at Camp 4, running, slacklining, and having a picnic with his wife and daughter. Real People was a television series aried at NBC television from 1979 to 1984, in which different hosts in front of a large studio audience were presenting reportages of varied 'real people' (as opposed to celebrities) with unique occupations or hobbies. 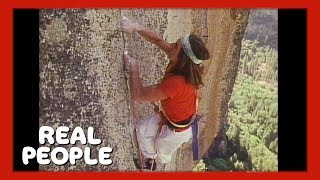