Hazel Findlay enjoys an epic day of mountain running and solo climbing in the Welsh mountains of Snowdonia. Stunning shots combine with a considered soundtrack underpinned by a subtle environmental message. The first version of the film, which toured with the Brit Rock Film Tour 2018, consisted in essentially the same video editing but with a different text. Sometime later, Paul Diffley together with Hazel Findlay revised the script and wrote an alternative version, which ended up being this final piece. 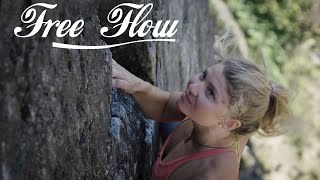