Produced in with backing by Sears Roebuck and the co-operation of Sir Edmund Hillary and his first wife Louise Mary Rose, 'I Always Come Back to the Himalayas' is a rarely-seen documentary about the famed climber. The film takes the viewer on a journey with Hillary across several continents and shows a rarely-seen part of his life as a father and husband who brought his whole clan along on his incredible adventures. Tragically, roughly ten years after the film's release, his wife Louise and daughter Belinda (who is seen in the film as a youngster) were killed in a plane crash near Kathmandu airport. They had been en route to join Hillary in the village of Phaphlu, where he was helping to build a hospital. 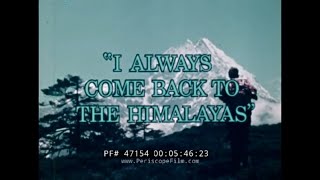