Documentary film of the Swiss newsreel about climbing in the Kreuzbergen. The film was produced in August 1943 by the Zurich company Gloria Film AG. The camera was directed by none other than Otto Ritter (1917-1977), whose work can be admired in well-known Swiss feature films such as ´Romeo and Julia on Dorf´ . The focus is on the two climbers Beni Motzer and Ernst Anderegg, who demonstrate the ascent of the 5th Kreuzberg. Didactic sequences show the current climbing equipment of that time and how to handle it correctly. The film premiered at the Olma in 1943 and was shown in Swiss cinemas from May 1944 as part of the weekly film show. Because of his spectacular shots he enthused the critics and was very well received by the audience. 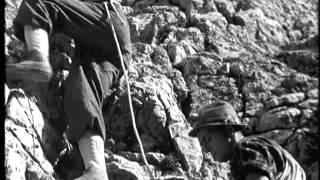