An ascent of Mont Blanc from Chamonix by a party of guides and clients. The team assembles in front of the statue of De Saussure and Balmat in Chamonix. The guides lead the party, which includes five ladies in long skirts, along a rocky path. At Pierre-Pointue, the team have lunch and they blacken their faces for protection against the sun. Then the mountaineers climb by a succession of snowfields, almost perpendicular glaciers, crossing the crevasses using a ladder. At Grands Mulets, four men of the party climb the rock pinnacles. The ascent continues by the glacier, and finally, after two days of travel since they left Chamonix, the team reaches the Vallot Observatory and later the Jansen Observatory, half buried in snow, on the summit of Mont Blanc. 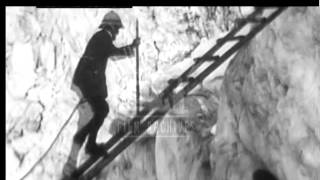