A film by Severino Casara dedicated to his friend Emilio Comici, who died tragically in a climbing accident in 1940. The documentary includes some shots of the great climber in action in the Dolomites. Comici, nicknamed the 'Angel of the Dolomites', is considered as the most extraordinary climber of the period between the two World Wars. He made over 200 first ascents in the Dolomites during his short career. Comici perfected the Bavarian technique of mountain climbing, and began the era of 'sixth grade' climbing. It was Comici who originated the concept of climbing direttissima routes, following the path a drop of water would take down the mountain. 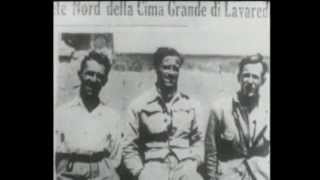