The first winter ascent of the Pointe Whymper in les Grandes Jorasses in 1974 with Yannick Seigneur, Marc Galy, Michel Feuillarde and Louis Audoubert. Generally the alpinistic expeditions become famous only when they are ruined by drama and tragedy. This film shows a serene expedition of four climbers on the north side of the Jorasses. The documentary received the Grand Prize of the 6th Diablerets festival in Switzerland. The jury considered that the film was marking a turning point in the expression of the alpine film, because it was showing without any sentimentality the reality of a first winter ascent: 'truth cinema in the true sense of the word'. 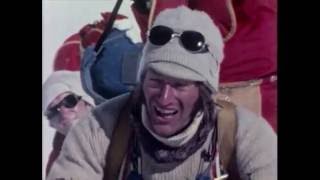