Lhotse 1981 - Južna stena is a documentary about alpinism that takes place in Lhotse. It was directed by Dušica Kunaver in 2011 and produced by Aleš Kunaver. It is a part of the series Prvi slovenski himalajci in bara sab Aleš. It features Stipe Božić, Aleš Kunaver, Janez Majdič, Marjan Manfreda-Marjon, Peter Markič, Vanja Matijevec and others. 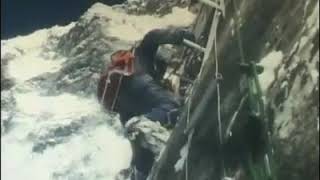