Record of the swiss expeditions to climb Mount Everest in 1952. Led by Edouard Wyss-Dunant, the 1952 spring Swiss Mount Everest expedition saw Raymond Lambert and Sherpa Tenzing Norgay reach a height of about 8,595 metres (28,199 ft) on the southeast ridge, setting a new climbing altitude record, opening up a new route to Mount Everest and paving the way for further successes by other expeditions. The film also records a second Swiss expedition in the autumn of 1952, after the monsoon, the first serious attempt to climb Everest at that time of year. A party including Lambert, Tenzing and others made it to the South Col, but was forced back by extremely cold weather after reaching an altitude of 8,100 metres (26,575 ft). 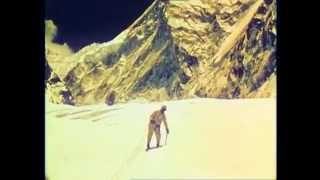