Color film of the first ascent of the Northwest Buttress of Mt McKinley in 1954 by Fred Beckey, Donald McLean, William Hacket, Henry Meybohm, and Charles Wilson. Prior to 1954, Denali had been climbed by only two routes, the east and west faces. The team completed the first ascent of the mountain from the south, forging a route up the long northwest buttress, adjacent to Wickersham Wall, said to be the world’s second-highest sheer precipice. The film was filmed by Fred Beckey and produced by Hanson-Roberts Films from Seattle. 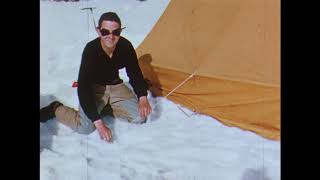