An old man remembers when his father introduced him to mountain climbing in the Alps of Tirol when he was a young boy. A mountain scenery is presented showing its flora and fauna and then we see the father and the boy approaching to the mountain face by a mountain path. On the rock face we see both men rock climbing up to the top, and at the end of the film we go back to the present tense and see the old man accessing the top of a mountain in summer using a modern chairlift in a ski resort. Surely the film was made using film footage from different origins, as the two men on the mountain path are different from those on the rock wall, which are men of similar ages. 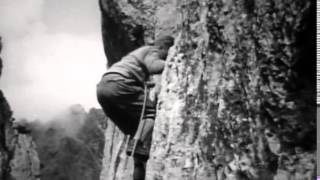