The Escape from Alcatraz documents Rich Purnell on a mixed route he has dreamed of climbing for close to 10 years. In the summer of 2004 Rich started bolting the route with Eric Malmgren. After several attempts to reach the cave in the summer Rich and Eric ended up climbing a full pitch of 5.9 rock to reach the cave. After 8 days of attempting the enormous roof, Rich Purnell finally climbed the route and rated it M14. This film portrays frustration, enthusiasm, and motivation to climb one of the hardest mixed routes in North America. 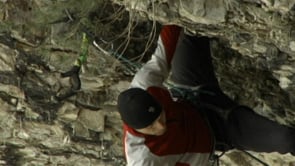