Ron Fawcett at his peak in the climbing on the breathtaking limestone walls of the Verdon Gorge of Southern France, accompanied by his wife Gill and Gerry Peel. In the film, Ron and Gill are interviewed in Britain and we can see them climbing and training in the Peak District. Then in France, they camp with tents in a camping, and between climbs, they appear in a cafe terrace at night talking to Patrick Edlinger. Fawcett is noted for being amongst the outstanding rock climbers of the 1970s and 1980s, and for being one of the first professional rock climbers. 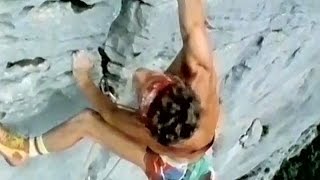