A brief recount of the 1994 Everest Expedition to the Kangshung Face in Tibet. With Alex Lowe, Barry Blanchard, David Breashears, Steve Swenson, Sandy Hill. The Kangshung Face or East Face is the eastern-facing side of Mount Everest, one of the Tibetan sides of the mountain. It is 3,350 metres (11,000 ft) from its base on the Kangshung Glacier to the summit. Most of the upper part of the face is composed of hanging glaciers, while the lower part consists of steep rock buttresses with couloirs between them. It is considered to be a dangerous route of ascent, compared to the standard North Col and South Col routes, and it is the most remote face of the mountain, with a longer approach. 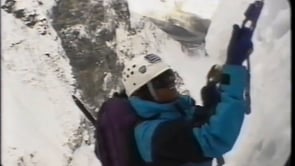