After a whole year of planning, scouting and guesswork, Freeskiers and adventurers Matthias 'Hauni' Haunholder and Matthias Mayr accomplished their personal mission impossible. They skied the 'Gora Pobeda', highest Peak of Eastern Siberia, which had never been attempted before. Gora Pobeda' is known to be a very difﬁcult mountain to ascend, partly because it´s a steep, rocky and icy peak but also because it is so hard to reach. The next village with road access is more than 350 km away. The next helicopter and hospital is 1300 km away in Yakutsk. Beside that it is one of the coldest regions in the world with temperatures dropping below minus 60˚C. The time window to ascend and descend the mountain is very small due to the extreme continental climate. 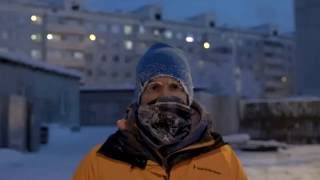